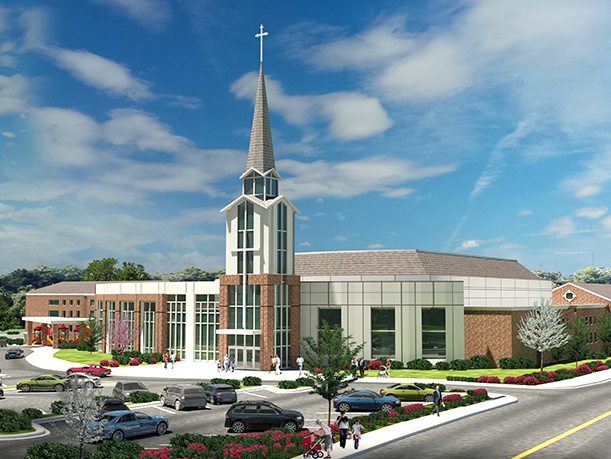 Columbia Baptist Church is located within the city of Falls Church and owns most of the city block on which it is built. The combination of older buildings, city restrictions and growth caused the church to begin the process of planning for the future in order to optimize the use of their property and buildings.

An initial Master Plan was done by an out-of-state organization which was very aggressive in its approach. While it solved many of the church’s needs it proved to be well beyond the church’s financial resources and it could not be phased.

Helbing Lipp Recny Architects came along side of Columbia and redesigned the concept to keep church options open and to create a realistic phasing plan that would allow the church full use of its existing facility while building the new.

The Phase I concept involved constructing a new state-of-the-art worship center facility with 1,200 seats on the west side of the existing church. It would link up to the existing corridor system and provide a much improved open loop circulation pattern along with a generous two‐ story narthex gathering” space.

Phase II would allow the church to replace the inefficient older three story educational building between the chapel with the existing worship center with a new 27,000 sq.ft. structure.

Phase III and IV would be the addition of structured parking for 344 cars.